Dan Lilkas-Rain Named State Recycler of the Year for 2016!

COOPERSTOWN – Dan Lilkas-Rain, Recycling Coordinator for the Town of Bethlehem, was named the top New York State Recycler for 2016 in Cooperstown on Nov. 4.

From the beginning, Lilkas-Rain has been a driving force in the NYSAR3 textile campaign ‘Re-Clothe NY’. Collaborating with a number of regional and national groups, he helped develop an award-winning, innovative state-wide public outreach project for textile recycling, with the goal of increasing diversion of textiles from disposal. His efforts with NYSAR’s Textile Recovery working group lead to the development of an innovative set of public communication resources, including an outreach toolkit, media tools, and a database of collection sites that is serving as a model of excellence for other states.

Lilkas-Rain also serves as an active At-Large member of NYSAR’s Board of Directors, chairs its Green Schools committee, and participates in the Organics Council. In his “day job” with the Town of Bethlehem, he encourages higher rates and better programs.  A recent example is a pilot food waste program that will allow residents to drop off food scraps at collection sites around the town, which will then be composted.

Dan Lilkas-Rain, Recycling Coordinator for the Town of Bethlehem, (left) is presented with the 2016 Recycling Leadership Award by NYSAR3 President Jim Gilbert.

Other awards included: Lifetime Achievement - Sharon Driscoll, recycling coordinator for Madison County, has spent 25 years tackling countless recycling initiatives and has made significant environmental contributions statewide, including advocating for recycling stations at NY State Thruway stops.  She developed a weekly HHW disposal program which has been used as a model by other municipalities, along with a Reuse Store, and in 2004, she advocated for a ban on disposal of E-Waste in the local landfill, which was implemented long before the statewide ban went into effect.

A new category this year, Recycling Leadership Youth Award, was given to Lilith Soechting, Sophia Fromson and Paige Baxter. The three members of Girl Scout Troop 251 in Kingston, Ulster County, spent their summer going door to door in their city spreading the word on proper source separation of recyclables.   Inspired by their previous experience with bottle and can collection drives, the girls took their passion for recycling further by creating an educational campaign for city residents which included a fun and motivating 8-minute video describing correct source separation for city residents.

NYSAR3, the premiere recycling organization in New York State, provides members with expertise and education on waste reduction, reuse and recycling issues and practices to improve the environment. The group advocates for policies and programs that support environmental sustainability in the Empire State and provides access to a network of individuals and organizations that share ideas about starting and improving reduction, reuse, and recycling programs, as well as information on education and funding. More details are available on their website: www.NYSAR3.org.

Delmar, NY – The Town of Bethlehem had a special reason to celebrate Earth Day this year. Bethlehem’s Recycling Coordinator, Dan Rain, accepted a 2015 U.S. EPA Environmental Champion award at a ceremony on Friday, April 24. The award is being presented to the New York State Association of Reduction, Reuse and Recycling (NYSAR3) for the statewide “Re-Clothe NY” clothing and textile recycling campaign, and Rain will be accepting the award as campaign chairman.

The Environmental Champion Awards are the “highest recognition presented to the public by EPA,” and given in recognition of “those who have demonstrated an outstanding commitment to protecting and enhancing environmental quality and public health,” according to a letter of congratulations sent by EPA Regional Administrator Judith Enck.

“Re-Clothe NY” is a collaboration between the New York State Association of Reduction, Reuse and Recycling (NYSAR3), Secondary Materials and Recycled Textiles Association (SMART), and the Council for Textile Recycling (CTR). The initial launch collected more than 100,000 pounds of textiles in municipalities across New York on America Recycles Day in November 2014—the number continues to increase as special events and local efforts continue through Earth Day and beyond.

The Town of Bethlehem has been one of the most actively participating municipalities in the Re-Clothe NY campaign. For example, the Town has directly collected over 54,900 lbs of textiles since the campaign launched, at two events and ongoing collection bins.

“The partnership between NYSAR3, SMART and CTR is an effective model of how the public and private sectors, along with not-for-profit entities, can collaborate to create statewide change,” said Jim Gilbert, NYSAR3 president. “As a result of ‘Re-Clothe NY,’ residents throughout New York have a heightened awareness of the need to keep textiles out of the trash in order to support jobs and minimize disposal impacts. This EPA Environmental Champion Award recognizes the environmental leadership of NYSAR3 members across the state and celebrates their daily efforts to help residents, schools and businesses in their local communities reduce waste and conserve precious natural resources.”

The campaign produced an innovative set of public communication tools, including a website with a searchable database of textile drop off locations, a media relations tool kit, and social media platforms. Recycling coordinators from across the state are using these tools to educate local residents about their role in preventing over one billion pounds of post-consumer textile materials, with a market value of over $200 million, from ending up in the trash each year. This unprecedented campaign generated statewide awareness of the need to recycle textiles, with traditional and digital media attention reaching more than 4,000 media outlets.

“We believe this collaboration with NYSAR3 and CTR has produced a template that can be used by any state in the country seeking to launch an effort to raise awareness about textile reuse and recovery,” said Jackie King, SMART executive director. “No other state in the nation has yet undertaken such an extensive campaign to focus on this material and develop resources to provide a turn-key template for any state, municipality or town to raise awareness and increase diversion of this valuable and untapped reuse and recycling resource. We strongly urge other states to take a look and use this effort as a model for the nation.”

According to NYSAR3, each year, New York residents dispose approximately 1.4 billion pounds of recoverable clothes and textiles, with an estimated market value of over $200 million. In Albany County alone, an estimated 21 million pounds of clothes and textiles, with an approximate market value of $3.27 million are trashed every year. 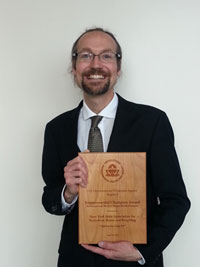 “The EPA Award is a big honor for the Re-Clothe NY campaign, including all the municipalities that have participated, and our campaign partners from the private and not-for-profit sector. I’m proud to be a part of the team that’s helping raise awareness statewide about keeping clothing and other valuable textiles out of the trash,” said Dan Rain. “I’m grateful for the support of my colleagues at NYSAR3, at the Town of Bethlehem including my supervisor, Highway Superintendent Brent Meredith and Town Supervisor John Clarkson, and last but not least, my family,” Rain added.